The Joint Learning Program (JLP) invites Union members of the Core Public Administration and their employer counterparts to join its team of workshop facilitators. As a JLP facilitator, you will be part of a volunteer cadre of Public Service employees who are contributing to improved labor-management relations and healthier federal government workplaces.

When you become a JLP facilitator, you will join a community of more than 1,500 union and employer facilitators across Canada who have participated in the JLP since 2002. JLP facilitators work in many different kinds of jobs and represent almost all federal government departments. Some of them hold union positions, some of them are managers and executives, and all of them are connected by a common interest in working collaboratively to inspire positive change in their workplace. See the new JLP video on facilitation to get a sense of what it is to be a facilitator with the Program.

Through their involvement with the JLP, many facilitators told that they experienced personal growth and a renewed commitment to their public service careers. They developed new skills and form new friendships. And they got great satisfaction from successfully co-facilitating learning events that create a space for dialogue among their peers.

If you are selected as a potential JLP facilitator, you will attend a five-day facilitation training session that provides you with a strong foundation of facilitation skills. You will work jointly with union and employer representatives and you will experience an overview of the JLP program and learning materials. With the exception of salary and overtime (if applicable), which are paid by your department, all costs for this training (including travel and accommodation, if required) will be paid by the JLP.

For more information or to submit an application, please contact the Regional Field Coordinators in your region. 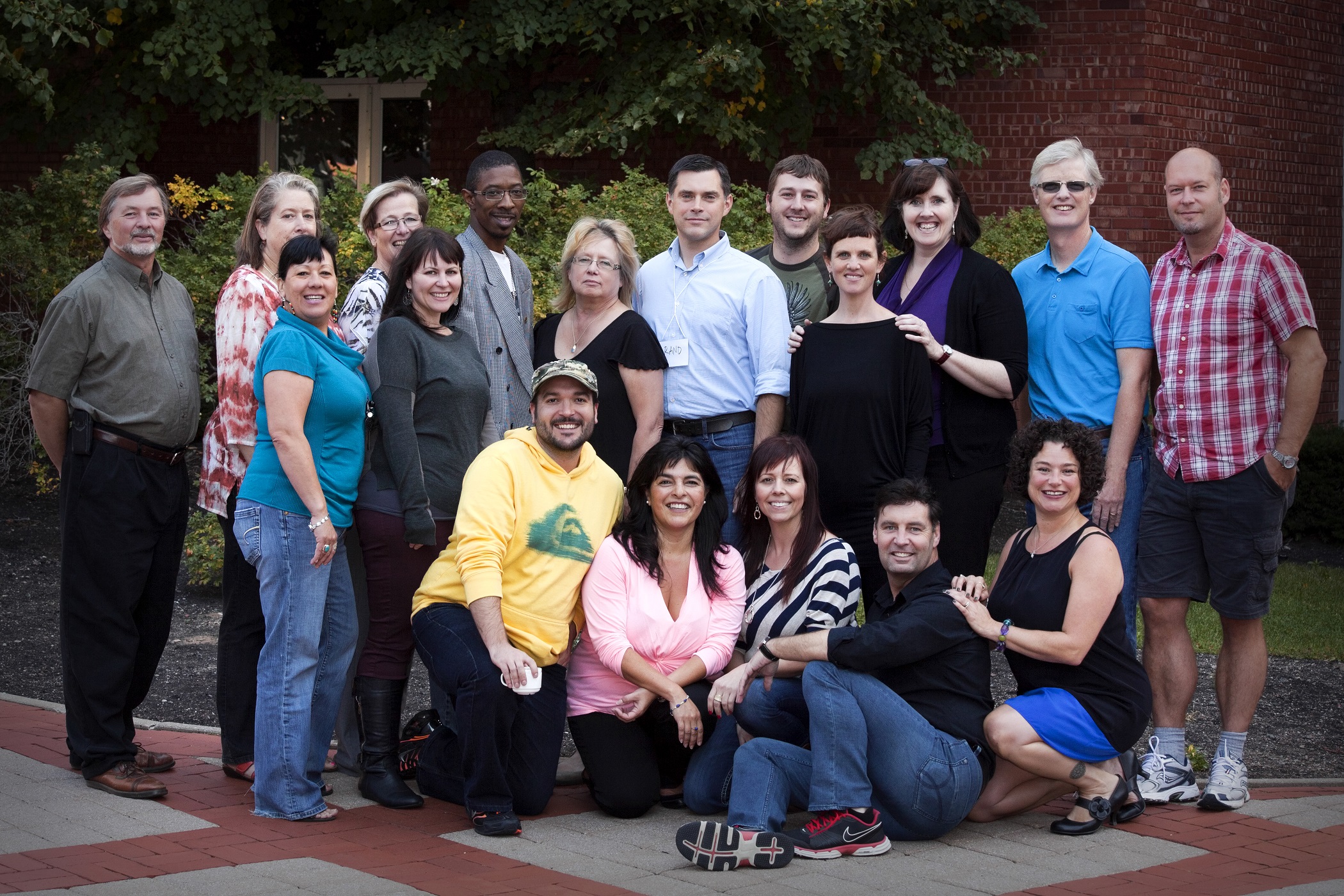 The Joint Learning Program (JLP) had kiosks at several Public Service Alliance of Canada Component Conventions to greet facilitators and organizers and to promote its initiatives mainly the new Mental Health in the Workplace workshop through the Unions. The Conventions were as follow: 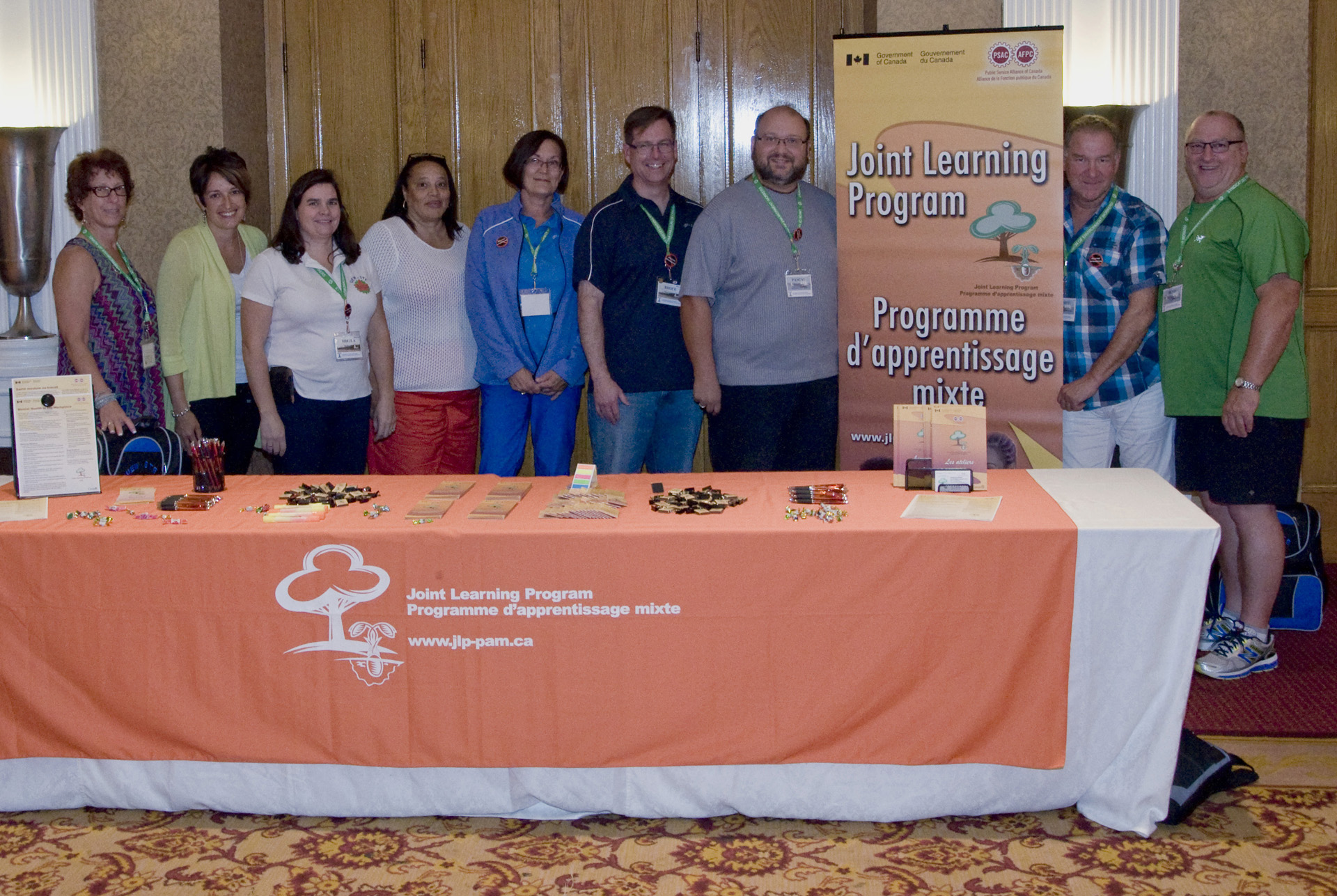 Some UEWC delegates, observers and organizers were greeted at the JLP kiosk by the Atlantic Regional Field Coordinators, Angela Léger, second from left, and Wanda Thomas, fourth from left.

The Joint Learning Program at the National Joint Council Symposium

The Joint Learning Program (JLP) participated in the National Joint Council (NJC) symposium which was held in Gatineau,September 17 and 18.

On the morning of the 17th, the new JLP branding was unveiled during the opening meeting. At the same time, a workshop on the new JLP Mental Health in the Workplace material was offered to the symposium participants.

National Capital Regional Field Coordinators, Linda Iezzi and Alex Roussakis greeted the participants who came by the JLP kiosk and distributed them publications and promotion articles identified with the new branding.

After a career spanning the course of 33.5 years, Ross MacLeod, Assistant Deputy Minister, Governance, Planning & Policy Sector, the Office of the Chief Human Resources Officer, Treasury Board of Canada Secretariat, will be retiring effective October 30, 2014.

Mr. MacLeod has been the Co-Chair of the Joint Learning Program (JLP) since 2009. He was instrumental to the success of the JLP outreach in the Government of Canada. The JLP community is grateful to Mr. MacLeod for his leadership and vision. 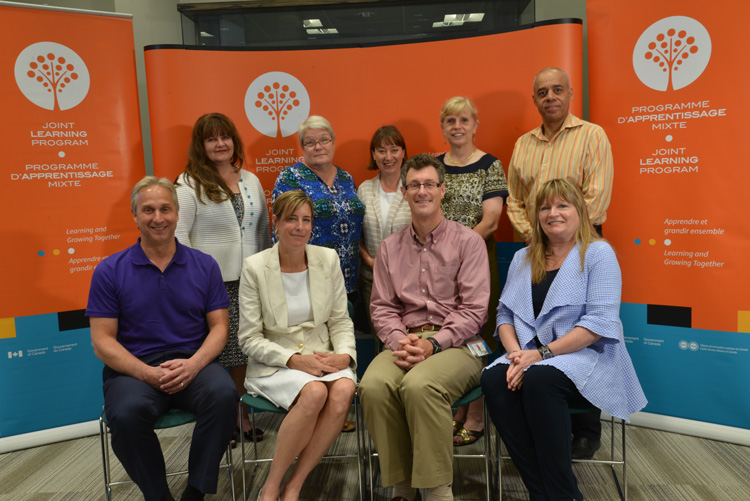